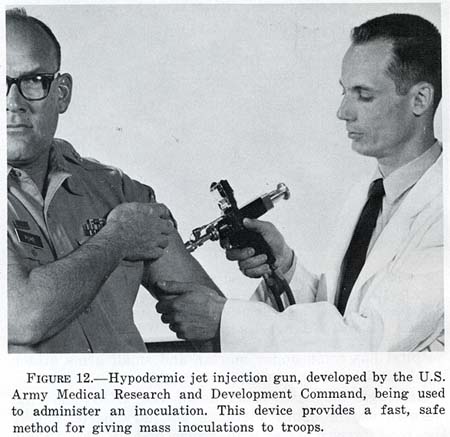 This photograph was included in the Army’s Report: “A Decade of Progress. The United States Army Medical Department 1959 – 1969.” (1971) According to that publication, the Army developed its own jet injection gun in 1968.

Many veteran will recall standing in line early in their service and waiting to receive inoculations from a doctor holding a jet injector. Veterans have described to me their recollections of seeing the soldiers ahead of them wince during the shot and walk away with a bleeding shoulder. Then the doctor would hit the next fellow, and the next, and so on, until it was your turn. This happened for decades, and thousands and thousands of recruits received injections in this way. Two of the veterans I am helping today are now fighting to win benefits due to Hepatitis C infections they believe arose from the injections.

A jet injector basically uses pressure to stream a medication directly through a person’s skin.  As the clipping above states, the device was originally celebrated as a fast and safe way to give mass inoculations. In 1960, a U.S. DOD scientist Aaron Ismach improved the jet injector to a point that it could be used in the field. The device was credited with helping beat back small pox.

In the 1990s, enough concern for safety (and litigation) arising from blood-borne illness transmitted through these injectors prompted the DOD to stop using jet injectors. According to a 2006 Army publication:

The DOD and USCG withdrew needle–free multi–use nozzle jet injectors (MUNJIs) capable of 600 or more injections per hour, formerly identified within DOD supply systems as “hypodermic injection apparatus jet automatic: 115 volt or foot operated,” in 1997 due to safety concerns. Their use of the same unsterile nozzle and fluid pathway to inject consecutive patients could allow transmission of bloodborne pathogens. The MUNJIs are known by the trade names Ped–O–Jet®, Med–E–Jet®, Hypospray®, and DermoJet®, among other brands, and were usually refilled quickly from attached multidose vaccine vials. These devices remain unapproved and will not be used.

The concern came about because, in essence, the pressurized injection would cause blood and bodily fluids to come to the surface of the skin, and then splash back onto the injector. This would contaminate the device, and the next person in line might then get infected. In 1985, this concern was actualized. A hepatitis B infection was found to have spread among members of a health club.  A study zeroed in on use of a jet injector as the source of the infection.

From January 1984 through November 1985, 31 clinical cases of hepatitis B occurred among attendees of a weight reduction clinic (clinic 1). Before the onset of illness, each case-patient had received a series of injections of human chorionic gonadotropin administered by jet injectors at clinic 1. … None of the 22 persons who had received injections only by syringe experienced hepatitis B virus infection. Stopping the use of the jet injectors on July 2, 1985, at clinic 1, was associated with the termination of this outbreak. This investigation demonstrated that jet injectors can become contaminated with hepatitis B virus and then may be vehicles for its transmission.

In some cases, however, jet injectors could bring blood or other body fluids to the surface of the skin while the vaccine was being administered. Those fluids could contaminate the injector, creating the possibility that viruses could be transmitted to another person being vaccinated with the same device.  The study, published in 1990, can be found here.
Now the Center for Disease Control continues to recommend against use of jet injectors because of the risk of transmission of blood-borne illness:

Jet injectors that use the same nozzle for consecutive injections without intervening sterilization were used in mass vaccination campaigns from the 1950s through the 1990s (102); however, these were found to be unsafe because of the possibility of bloodborne pathogen transmission (105–108) and should not be used.

Despite strong evidence of the risk of disease transmission, the VA still refuses to concede that jet injectors can be a source of Hepatitis C infection.  One veteran I am currently helping even obtained a note from his VA nurse that stated she thought his HCV came from the jet injection he got in the Army — and the VA still denied him. The Regional Office relied the VA’s incredibly ambivalent announcements in its publication, Hepatitis C: Military-Related Blood Exposures, Risk Factors, VA Care, available here. Essentially, the VA is creating a massive escape hatch (against its own directive to help the veteran) by holding that, while the injectors spread disease, there’s been no documented case of them spreading Hepatitis C:

There has been considerable interest expressed by veterans and organizations representing them concerning the possible relationship between hepatitis C virus (HCV) infection and immunization with jet injectors (air gun injection) or other military-related blood exposures. Although there have been no case reports of hepatitis C being transmitted by a jet gun injection, it is biologically plausible.

The same faulty reasoning is found in a June 29, 2004, the VA issued a Fast Letter in response to a 2003 Rating Decision received by a veteran who actually won service connection for his Hepatitis.

It’s still possible to win service connection for Hepatitis C because of jet injection. Here’s an example of a lucky fellow. But the VA is not going to make it easy. Why? Because as soon as the admit that jet injections spread hepatitis C, thousands and thousands of servicemen and servicewomen will have potential claims. Unfortunately, I think it will take an outbreak of Hepatitis C similar to what occurred in that health club in the 1980s before the VA will admit the truth.  Until then you will have to fight them. 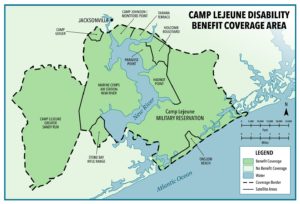